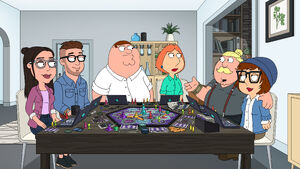 Matt and Kate are a millennial couple who mistake Peter and Lois for fellow young parents in "Young Parent Trap".

After meeting at an open house at Stewie's school, Matt and Kate invite Lois and Peter out for late night drinks. When the foursome stop by Matt and Kate's apartment so Peter can use the bathroom, they discover there's an empty unit with a toilet shaped like a Hungry Hungry Hippo and they quickly snap it up. Irritated at being left alone in the old house, Chris later discovers where they're staying thanks to a report of loose meat in a swimming pool, so Meg and Chris pose as another young couple and move in.

With them determined to get Peter and Lois to expose themselves, they managed to founder through as they get invited to go to the Quachella music festival. Dealing with the hassles including a lack of restrooms finally causes them to throw in the towel, but they also point out to Matt and Kate that they've been fooled by a couple of teenagers.