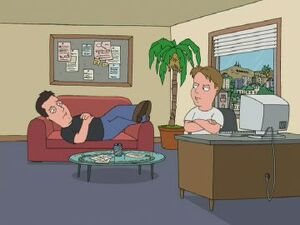 Matthew Paige "Matt" Damon (born October 8, 1970) is an American actor, writer and philanthropist whose career was launched following the success of the film Good Will Hunting, from a screenplay he co-wrote with friend Ben Affleck. The pair won the Academy Award for Best Original Screenplay and the Golden Globe Award for Best Screenplay for the work and Damon garnered multiple nominations for Best Actor for his lead performance in the same film.

In "Fast Times at Buddy Cianci Jr. High", a scene depicts Ben Affleck and Damon arguing over whether Matt should credit Ben on the first copy of Good Will Hunting script, in a nod to the actual controversy over whether both Ben and Matt wrote the Oscar-winning screenplay.

Peter gets a job as Damon's neck in "Family Gay".

In a parody of their film The Departed, Damon and Leonardo DiCaprio star in The Detarded, about two retarded detectives in "Tales of a Third Grade Nothing".

Brian takes Kate to see a Hilary Swank film, The Matt Damon Story, in "The Blind Side".

When Jason Bourne, one of Damon's characters, isn't available in "Run, Chris, Run", a special forces agent considers replacing him with Jeremy Renner.

The guys watch Marvel's The Offenders, a parody of The Avengers featuring sexual predators in "HTTPete". Woody Allen asks if Matt will be coming but is told by Bill Cosby that he won't, but is aware of what is happening, referring to a speech made defending some sexual predators and men in general in Hollywood.[1]

Retrieved from "https://familyguy.fandom.com/wiki/Matt_Damon?oldid=204682"
Community content is available under CC-BY-SA unless otherwise noted.