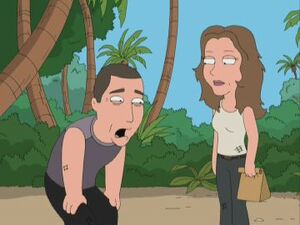 He appears in "Baby Not On Board", criticized for sounding like he's out of breath every time his character spoke. During the cutaway, he hyperventilates in a bag of Kate Austen's feces.

He is voiced by writer John Viener.

Retrieved from "https://familyguy.fandom.com/wiki/Matthew_Fox?oldid=141615"
Community content is available under CC-BY-SA unless otherwise noted.