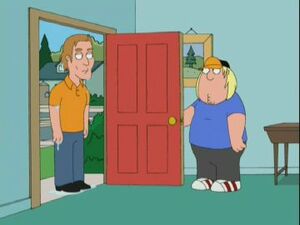 He first appeared in "You May Now Kiss the...Uh...Guy Who Receives", where Stewie Griffin, posing as an air traffic controller learns that he is on a plane heading to Quahog. Stewie misleads the pilot, causing McConaughey's plane to crash into the ocean. He later shows up at the Griffin's home where Stewie promptly shoots him through the eye with a crossbow. Stewie instructs Chris to help bury him.

Jared, an alumnus of Little Clam Pre-School who appeared in "Peter-assment", is based on McConaughey's Dazed and Confused character.

Chris imitates Matthew while trying to cover Santa's Little Helper's disappearance while at The Simpsons' home in "The Simpsons Guy".

Retrieved from "https://familyguy.fandom.com/wiki/Matthew_McConaughey?oldid=224496"
Community content is available under CC-BY-SA unless otherwise noted.