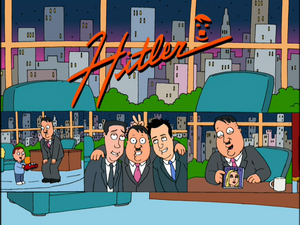 Matthew Langford Perry (born August 19, 1969) is an American-Canadian actor, known for his work on the NBC sitcom Friends, for which he earned a Emmy Award nomination in 2002. Perry also starred in the short-lived series Studio 60 on the Sunset Strip, as well as having roles in the films The Whole Nine Yards, its sequel The Whole Ten Yards, Numb , and 17 Again.

He appears in "Death Is a Bitch" as a guest on Adolf Hitler's hypothesized late-night talk show, Hitler, appearing with Friends co-star David Schwimmer.

Peter and the guys spend time insulting Perry's live action appearance in "Adam West High", although Quagmire defends him by noting that Friends brings him a lot of joy.

Retrieved from "https://familyguy.fandom.com/wiki/Matthew_Perry?oldid=213150"
Community content is available under CC-BY-SA unless otherwise noted.