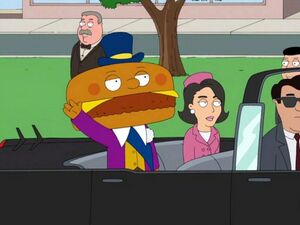 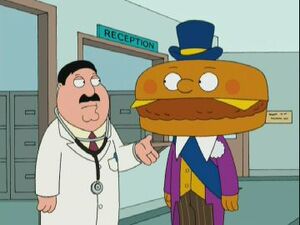 Mayor McCheese is the Mayor of McDonaldland. He has an enormous cheeseburger for a head, and sports a top hat, a diplomat's sash, and a pair of pince-nez spectacles. The character was dropped during the streamlining of the characters in the 1980s.

He seeks plastic surgery in "Believe It or Not, Joe's Walking on Air". Dr. Hartman rejects his request since McCheese has a cheeseburger for a head. Mayor McCheese thanks Dr. Hartman for telling him the straight facts.

In "Road to the Multiverse", he appears as President of the United States in a reality where Frank Sinatra had never been born to influence John F. Kennedy's election. Richard Nixon then botches the Cuban Missile Crisis plunging the Earth into World War III. Mayor McCheese is the one who was shot by Lee Harvey Oswald with his wife Jackie McCheese, eating the meat that was shot off.

He appears in "Valentine's Day in Quahog" when Carol West promises Mayor Adam West she would never cheat on him with another Mayor. McCheese appears with an innuendo; implying she was seeing him too.