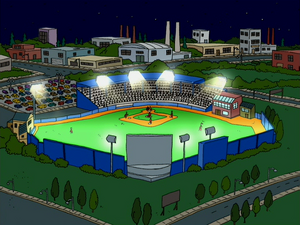 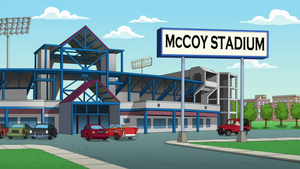 McCoy Stadium is a Minor League baseball stadium in Pawtucket, Rhode Island. It is currently home to the Pawtucket Red Sox of the International League. It has been the team's only home in their 40-year history.

When Peter is lead to believe a restaurant placemat is a treasure map in "Finders Keepers", clues lead the town to the island to dig up Timmy. Inside the coffin, they discover another clue that sends most of the town to McCoy Stadium where they dig up the field searching and end up in fights with each other in their effort to find the treasure.

The stadium for the Quahog Whooping Scalpers in "The Movement" is based on McCoy stadium.[1]

Retrieved from "https://familyguy.fandom.com/wiki/McCoy_Stadium?oldid=223988"
Community content is available under CC-BY-SA unless otherwise noted.