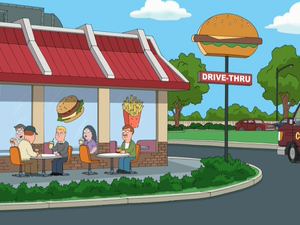 Brian offers Stewie a trip to McDonald's to make him feel better when he is sad over his trip being a disaster in "Road to Europe", but the latter decides to poop in Mother Maggie's shoes instead.

In "Brian Sings and Swings", Stewie comes home two hours past his bedtime and asks Brian if he remembers him, noting that he left him at the counter with a sack of burgers.

Ronald Reagan does a "Reagan Smash" on the side of a McDonald's restaurant in "Peter's Got Woods".

In "Stewie Kills Lois", Cleveland remarks that the Sears located near his house has an in-store McDonald's.

In "Not All Dogs Go To Heaven", Stewie took the cast of Star Trek: The Next Generation there for lunch. Marina Sirtis tells Stewie that she's not a fast-food eater. Brent Spiner asks for McNuggets, while Wil Wheaton asks for a cheeseburger, a hot dog and a milkshake. Stewie then orders two McChicken sandwiches and a diet coke. He asks Michael Dorn what he wanted and Michael asks for a McDLT which was discontinued in 1990.

The company's mascot, Ronald McDonald, freaks Chris Griffin out in "Petergeist". He grounds his daughter Lisa McDonald for wearing too much makeup in "Fifteen Minutes of Shame".

Lois dresses up as Grimace for a sexy roleplay in "Prick Up Your Ears".

Mayor McCheese seeks plastic surgery in "Believe It or Not, Joe's Walking on Air". Dr. Hartman rejects his request since McCheese has a cheeseburger for a head. McCheese thanks Dr. Hartman for telling him the straight facts.

In the Apocalyptic Universe in "Road to the Multiverse", McCheese replaces John F. Kennedy of the regular timeline as President of the United States.

In "Cool Hand Peter", it's parodied as McDaniel's.

Joe has Grimace for an uncomfortable ride-along in "Life of Brian".

In "JOLO", the Griffins get excited over the return of the McRib.

Peter's attempt to send death threats to Grimace in "Inside Family Guy" fall short when his letters demanding an extended period to buy shamrock shakes are returned.

A cutaway gag in "Cop and a Half-Wit", shows Orson Welles performing his The War of the Worlds broadcast outside of a McDonald's to encourage the crowd to leave, while at the same time, trying to keep the staff in place.

Peter's outfit in the Quentin Tarantino segment of "Three Directors" is a homage to Ronald McDonald.

In "Married...With Cancer", Jess has having sex in a McDonald's PlayPlace on her bucket list.

While explaining that the network prefers fake names for products in "You Can't Handle the Booth!", the restaurant is referred to as 'McDarrell's.'

Peter/Noah places the seagulls with McDonald's wrappers on the Ark in "Holly Bibble".

Retrieved from "https://familyguy.fandom.com/wiki/McDonald%27s?oldid=222394"
Community content is available under CC-BY-SA unless otherwise noted.