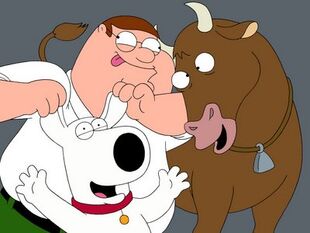 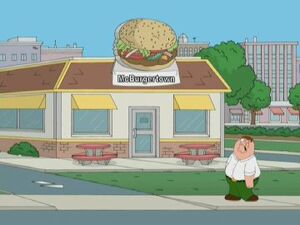 Peter decides to grow a mustache, since he believes his life will be better that way. It is for awhile, until he is mistaken for a fireman because they apparently all have mustaches. He lends a hand when a fire breaks out at a local fast food restaurant called "McBurgertown". Peter saves the life of the owner, but loses his mustache in the process. The grateful owner gives him unlimited burgers as a “thank you”. True to form, however he eats so many that he has a stroke, leaving his left side entirely numb for months. When Peter recovers via a stem-cell treatment, he vows to expose the fast-food company and, after infiltrating the McBurgertown headquarters and slaughterhouse, becomes friends with the genetically engineered cow who blows the whistle on the company's practices. 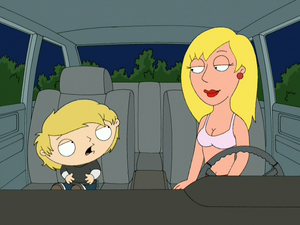 Meanwhile, Stewie makes a bet with Brian that he can become the coolest kid in James Woods High. He puts on a cool disguise and successfully becomes the most popular kid in school. He asks Connie DiMico out to a movie and later to have sex, but Connie finds out he has a small penis. The next day, she tells everyone and humiliates Stewie. When Stewie goes to talk to her, they have an apology kiss. But Stewie reveals he's a baby and gets revenge by humiliating Connie by getting her arrested for inappropriately kissing a naked baby.

Retrieved from "https://familyguy.fandom.com/wiki/McStroke?oldid=216348"
Community content is available under CC-BY-SA unless otherwise noted.