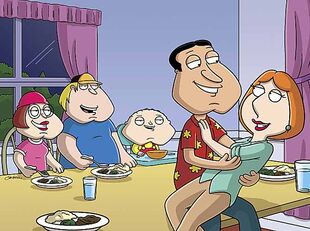 Meet the Quagmires
Peter accidentally changes the timeline so that Lois is married to Quagmire. 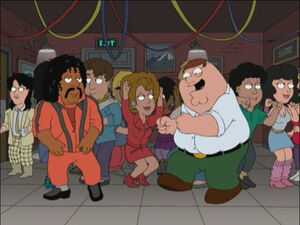 Peter, hearing Quagmire brag about his sexual exploits, feels that he has missed out on enjoying the single lifestyle. Death is summoned to the Drunken Clam on a false alarm, and he grants Peter’s wish by sending him, along with Brian, back to 1984 for one night. Appearing to others as his 18-year old self, Peter cancels his scheduled movie date with Lois, instead accepting an invitation from Cleveland to go and party at a bar. Peter enjoys the evening dancing and making out with Molly Ringwald when Death appears to return him to the present. 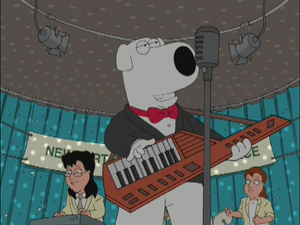 Back in the present day, Peter discovers that his past actions have had drastic effects on the world; he and Molly have been married for 20 years, Lois is married to Quagmire, Chevy Chase is host of The Tonight Show, and Al Gore is president of the U.S. The world seems to be a much better place with Lois and Peter unwed, but Peter begs Death to return him to the past anyways so he can undo his mistake. Back in the past, Peter is determined to accept Lois’ invitation, but stupidly blows his opportunity again and again, repeatedly asking Death for a do-over. Peter again goes out with Cleveland instead of keeping the date, Death refuses to give him another chance, and Lois is upset with Peter for missing their date. Peter and Brian sneak into the country club dance to prevent the kiss that caused Lois to fall in love with Quagmire. After Lois tells Peter that he’d had his chance and blown it, Peter almost gives up, and Brian realizes by looking at Peter's photo of Stewie, Chris and Meg and seeing the three fading away, but then demonstrates his passion, by punching out Quagmire and kissing Lois. He asks her to marry him, and she accepts. Brian performs Rick Astley's "Never Gonna Give You Up" and does well until he does a long note which shocks the audience.

Afterwards, Peter comes back to the present day to find that his life is now just the way it was originally except that Roger from American Dad! now seems to be living with them.

Retrieved from "https://familyguy.fandom.com/wiki/Meet_the_Quagmires?oldid=216355"
Community content is available under CC-BY-SA unless otherwise noted.