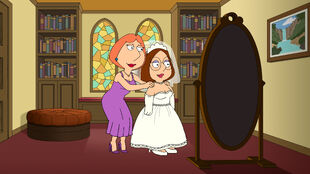 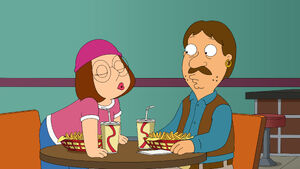 When Meg fails to score a date for a school dance, she decides to go hang out at the bowling alley. Striking up a conversation with Bruce, they decide to grab a snack together after his shift ends. To both of their surprise, their night out actually turns into a date. When she introduces him to the family as her new boyfriend, they have reservations about her dating an obvious gay man. However, Meg refuses to see this, and believes him to be straight. Under pressure from his parents, Bruce proposes and Meg accepts. Lois is particularly distressed, but Peter is willing to see what happens. 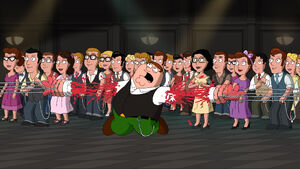 Meanwhile, when a magician at the Drunken Clam leaves his vest behind, Peter decides to start wearing it. But when his arms get tangled in jitterbug wallet chains at a Cherry Poppin' Daddies concert, they accidentally tear his arms off. Thanks to Dr. Hartman, they are able to start growing back but it'll take some time. However, until then, Peter has difficulty doing normal activities.

Following a dinner with Bruce's parents, Lois is willing to allow Meg to proceed, but Meg calls a halt to the ceremony, admitting that she is aware that Bruce is gay and helps him reconnect with his longtime flame, Jeffery. Bruce's parents are in denial about their son until he confronts them about his life. Bruce proposes to Jeffery, but they have to take the ceremony to Walgreens parking lot when the priest refuses to marry them, but Peter makes short handiwork of it.

Attributing the show to running long, Peter's story is left unresolved but we are given a supercut of gags involving his short arms.

Retrieved from "https://familyguy.fandom.com/wiki/Meg%27s_Wedding?oldid=228177"
Community content is available under CC-BY-SA unless otherwise noted.