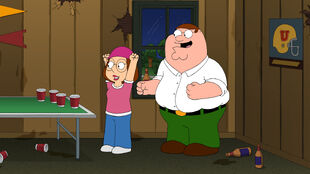 Meg Stinks!
Meg becomes the life of the party. 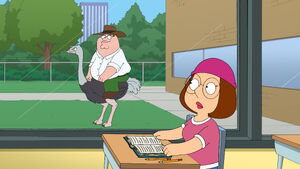 Meg and her parents attend a college fair where they find out that not only is Meg considered a top student, but Principal Shepherd arranged an interview for her at her preferred school, Green Mountain College. Peter and Lois fight it out to see who has to take her and Peter loses. On the way to the school, Peter and Meg enjoy each other's company, but Peter nearly regresses to his usual Meg abuse at a diner until he finds out that Meg knows a lot about his likes as they bond again. Arriving at the school, they find a party and continue to be friends, sharing a laugh during a whiz together. Back home, they reveal that they missed the interview but Meg defends their actions as being able to bond with her dad. 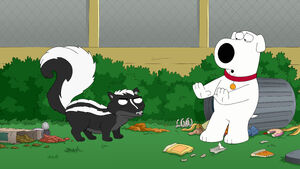 Meanwhile, trying to get some peace and quiet, Brian goes outside to read. When he hears a noise, he discovers a skunk and is sprayed, causing a ruckus in the house and is sent out to live after attempts to clean up fail. He finds that he can hunt and eat in the wild. As the smell fades, Brian finds he is meant to stay outdoors and starts to turn feral. Stewie begs Brian to return to the house but Brain refuses until it starts to thunderstorm, bolting for the house.

When Peter and Meg return, Lois discovers that Meg blew off her interview having fun with her dad and advises Meg to watch hanging out with Peter as he could ruin her future. She dismisses Lois' concerns but Peter's stunts begin to wear on Meg. She admits that she is having trouble dealing with Peter and asks for help, but Lois insists she work it out on her own as part of growing up. Meg reschedules her interview and tells Peter that she is going on her own, preferring he be her father instead of her friend. Peter cries as Meg departs, revealing that she got into her choice college, but contracted HPV and earns the nickname "the warthog."

Retrieved from "https://familyguy.fandom.com/wiki/Meg_Stinks!?oldid=163178"
Community content is available under CC-BY-SA unless otherwise noted.