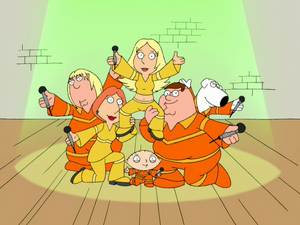 Meg and the Griffins was a band consisting of all the Griffin family: Peter, Brian, Chris, Stewie, Lois, and Meg Griffin. The band formed in the episode "Don't Make Me Over" and was managed by Dr. Diddy.

Since Meg was the lead singer and the most beautiful out of all the members hence the reason for the band's creation, the band was named Meg and the Griffins. They are a one-hit wonder for the song "Gonna Buy Me a Rainbow". Though talented, Dr. Diddy was more interested in exploiting Meg's look as a teen sex symbol, leading the band to travel to New York to perform on Saturday Night Live. The band seemingly broke up after Meg reverted to her old look.

Retrieved from "https://familyguy.fandom.com/wiki/Meg_and_the_Griffins?oldid=223280"
Community content is available under CC-BY-SA unless otherwise noted.