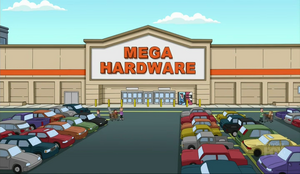 Mega Hardware is where Brian gets a job when he is kicked off of Peter's health plain in "American Gigg-olo".

He soon adopts an off-putting blue-collar attitude, irritating both his co-workers and Stewie, until the latter vows to get him fired. Following the advice of a Hispanic day laborer he picked up, Stewie plans a shaken-up can of soda in the manger's office with Brian's name on it as a gift, which indeed results in his being fired. When he tries to carry Stewie back to the store to tell of what he has done, he ruptures a hernia and Stewie is forced to operate on him. Brian feeds him information about the tools he has with him that are necessary for the operation, which impresses Stewie about his acquired knowledge.

Retrieved from "https://familyguy.fandom.com/wiki/Mega_Hardware?oldid=190227"
Community content is available under CC-BY-SA unless otherwise noted.