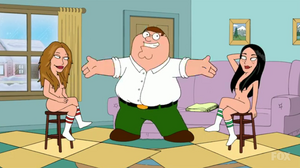 Megan Denise Fox (born May 16, 1986) is an American actress and model. She began her acting career in 2001 with several minor television and film roles, and played a recurring role on Hope and Faith, also starring Faith Ford and Kelly Ripa. In 2004, she launched her film career with a role in Confessions of a Teenage Drama Queen. In 2007, she was cast as Mikaela Banes, the love interest of Shia LaBeouf's character in the blockbuster film Transformers which became her breakout role and earned her various Teen Choice Awards nominations. Fox reprised her role in the 2009 sequel, Transformers: Revenge of the Fallen. She will not reprise the role in the third installment.

Tom Tucker "prank"-called her on Quahog 5 News in "April in Quahog".

She appears as one of Peter Griffin's Christmas wishes in "All I Really Want For Christmas" with Jessica Biel in "Road to the North Pole".

Fox was used in an intercourse hypothetical in "New Kidney in Town".

Retrieved from "https://familyguy.fandom.com/wiki/Megan_Fox?oldid=147897"
Community content is available under CC-BY-SA unless otherwise noted.