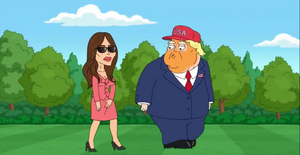 In "Trump Guy", she is seen blowing bubbles at the White House for Eric Trump to catch. Later, she slaps away Donald's hand repeatedly as they are about to board Marine 1, the Presidential Helicopter. When Peter Griffin and Donald start to fight, she tosses Peter a golf club as a weapon and offers to 'sex him' if he kills Donald in front of her.

Retrieved from "https://familyguy.fandom.com/wiki/Melania_Trump?oldid=210039"
Community content is available under CC-BY-SA unless otherwise noted.