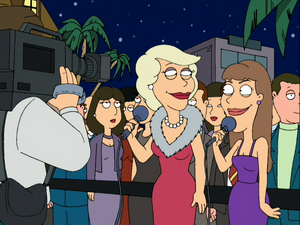 Melissa Joan Rivers (born January 20, 1968) is an American television host and the daughter of Joan Rivers. Teamed with her comedienne mother, Melissa hosted fashion on the red carpet interviews for the E! cable network. In 2003, Melissa and Joan left her red carpet pre-show on E! to accept a more lucrative deal with the TV Guide Channel.

In "Brian Does Hollywood", she appeared with her attention-seeking mother on the red carpet at the Adult Movie Awards.

Stewie claims to have turned down a gig on Fashion Police with Melissa in "Send in Stewie, Please".

Retrieved from "https://familyguy.fandom.com/wiki/Melissa_Rivers?oldid=202915"
Community content is available under CC-BY-SA unless otherwise noted.