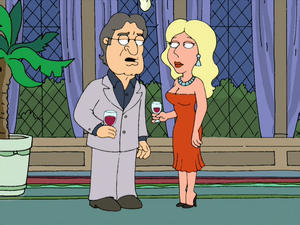 Peter plays Michael Douglas' Munch Out in a video game store at the Quahog Mall in "The New Adventures of Old Tom", in which Michael simulates oral sex in a boxing setting.

Michael is voiced by Kerrigan Mahan.

Retrieved from "https://familyguy.fandom.com/wiki/Michael_Douglas?oldid=186714"
Community content is available under CC-BY-SA unless otherwise noted.