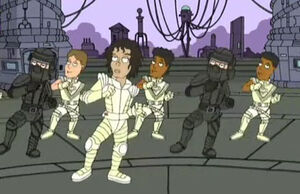 In "The Courtship of Stewie's Father", he appears in Walt Disney World when Peter and Stewie Griffin watch Captain EO. In an exaggeration of the 3D effects, Jackson runs out of the screen and grabs a kid in the audience.

In "Deep Throats", Brian, a cab driver, passes on Cleveland Brown, who requests his services. Later, following the breakup of Meg and Mayor Adam West, Brown is seen angrily destroying the cab, getting caught, and fleeing as he transforms into a black panther. This is a reference to the music video for Jackson's song "Black or White".

He also appears in "Prick Up Your Ears", when Lois refers to him as being sexually confused. He is shown eating a bowl of Frosted Mini-Wheats cereal, stating, while in the form of his childhood, says the kid in him likes the frosted side, while the grownup in him likes his younger self.

He appears in "Saving Private Brian" at the Grammy Awards but has no speaking lines.

In "Stewie Loves Lois", Stewie is seen testifying against Jackson at his child molestation trial.

In "Tales of a Third Grade Nothing" a reference to him grabbing his crotch during his routine is greatly exaggerated as it shows him punching himself in that area, hitting it with a baseball bat, and shooting it with a machine gun.

Jackson's song "Billie Jean" was among the songs mentioned by Brian as a song named after a girl in "Ocean's Three and a Half".

A line in the song "A Bag of Weed" from "420" has Stewie singing "when Michael Jackson needs a rush, he humps a guy like me." Jackson is then seen naked in a bed with Stewie, referring once again to the molestation charges. Jackson died on June 25th, 2009 of cardiac arrest two months before his 51st birthday, weeks before his comeback concert series, entitled This is It resulting in a broadcast delay of the episode in the UK.

In "Spies Reminiscent of Us", Mayor West says that he is a fan of Jackson's song "Thriller" and its video.

A biography about him ranks higher than Wish It, Want It, Do It. on Amazon.com in "Brian Writes a Bestseller".

He appears in the Quahog Mini-Mart as the Scarecrow on a poster of The Wiz during the song "All I Really Want For Christmas" in "Road to the North Pole". Carl wants a Blu-ray copy of the film as one of his Christmas wishes.

The ending of "The Hand That Rocks the Wheelchair" with Stewie's wolf-like yellow eyes and maniacal laughter is taken from the Michael Jackson's Thriller video.

Peter gets a flu shot purportedly from "the doctor that killed Michael Jackson" in "In Harmony's Way", although it should be noted that the actual physician, Dr. Conrad Murray, is African-American.

Lois cites lyrics to "Smooth Criminal", originally recorded by Michael in "Crimes and Meg's Demeanor" when trying to communicate with Annie, a comatose hospital patient.

Peter compares Brian in his cap to Michael in "Married...With Cancer".

Retrieved from "https://familyguy.fandom.com/wiki/Michael_Jackson?oldid=223470"
Community content is available under CC-BY-SA unless otherwise noted.