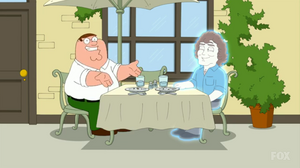 Michael Landon (October 31, 1936 - July 1, 1991) was an American actor who appeared in TV shows such as Bonanza, Little House on the Prairie and Highway to Heaven. He died from pancreatic cancer at the age of 54.

He appeared as a ghost in "Road to the North Pole" having lunch with Peter Griffin as part of his Christmas wishes in "All I Really Want For Christmas". It is apparent that Peter's wife Lois does not approve.

Retrieved from "https://familyguy.fandom.com/wiki/Michael_Landon?oldid=181673"
Community content is available under CC-BY-SA unless otherwise noted.