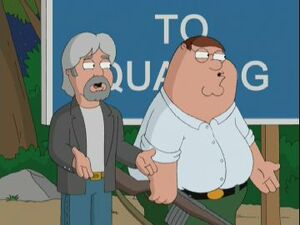 Michael McDonald (born February 12, 1952) is a gold and platinum-selling American R&B/soul singer and songwriter. He is sometimes described as a "blue-eyed soul" singer and sings in a distinctive "husky, soulful" yet baritone range. He is known for his work as a member of the Doobie Brothers, Steely Dan, Goldstar, and for several hits as a solo artist.

Peter Griffin hires him to sing backup for an entire night patrolling Quahog, Rhode Island for illegal immigrants in "Padre de Familia". At the end of the episode, he reappears to resume what he was hired for. By now, Peter is annoyed by this, even experimenting to see what he'd do if he farted.

In "Lottery Fever", Peter and the guys at The Drunken Clam watch a show called Michael McDonald during Allergy Season, where MacDonald is seen in a chair making pre-sneeze noises in the style of his singing.

During a 'Yacht Rock' cruise in "Yacht Rocky", the ship capsizes due to a rogue wave. As the Griffins and their friends try to make their escape towards the now-upright bottom of the ship, they encounter a jammed door preventing their escape. Michael is able to sing to whales outside of the ship to get them to change the angle of it just enough to allow them through.

McDonald is voiced by John Viener.

Retrieved from "https://familyguy.fandom.com/wiki/Michael_McDonald?oldid=225819"
Community content is available under CC-BY-SA unless otherwise noted.