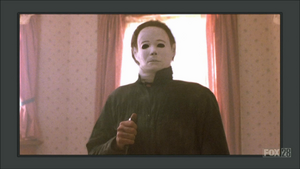 Michael Myers is a fictional character from the Halloween series of slasher films.

Michael Myers appears in "Tom Tucker: The Man and His Dream" where it is revealed that Tom Tucker performed the role in Halloween 4: The Return of Michael Myers.

Cleveland becomes frightened after he sits through Halloween II, so Peter sends Brian out to keep watch for Michael Myers in "Once Bitten".

Myers is voiced by Seth MacFarlane performing as Tom Tucker.

Retrieved from "https://familyguy.fandom.com/wiki/Michael_Myers?oldid=211426"
Community content is available under CC-BY-SA unless otherwise noted.