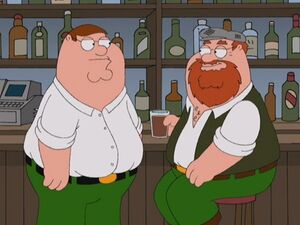 When Francis Griffin dies in "Peter's Two Dads", Brian tells Peter Griffin to go to a hypnotherapist. He uncovers memories of Francis telling him he isn't his real father. After this, Peter goes to his mother Thelma and asks her who his real father is. She tells him she met an Irish man when she was vacationing in Ireland. He and Brian go to Ireland to find Mickey. They find him, but Peter has to challenge the man to a drinking contest to prove he is his biological son. Peter wins which in turn wins Mickey's admiration and proves to him that Peter must be his son.

Peter doesn't meet his father until he is 43 years old. Mickey is a town drunk. Mickey has a talking sheep named O'Brian who is a counter-part to Peter's talking dog Brian.

Peter gets many of his qualities from Mickey, such as being a "fat stinking drunk." Mickey also bears a resemblance to Peter except that he has a tonsure of hair and an unkempt beard, whereas Peter is clean-shaven. After seeing much of Mickey's slovenly ways and happy-go-lucky attitude, Peter realizes the reason why there is an instant bond between the two as his true father. It is a possibility that many of Peter's other relatives may have been made up, as they all carry the last name "Griffin" yet share the physical attributes of Mickey, though they could have just appeared that way from Peter's imagination.

He was mentioned when Thelma told Peter about her attempted abortion and induced labor in Mexico in "Padre de Familia".

He also appears in archive footage of "My Drunken Irish Dad" in "Brian & Stewie" during the musical numbers segment.

He was also mentioned in "Quagmire's Dad" and "Papa Has A Rollin' Son".

Retrieved from "https://familyguy.fandom.com/wiki/Mickey_McFinnigan?oldid=209888"
Community content is available under CC-BY-SA unless otherwise noted.