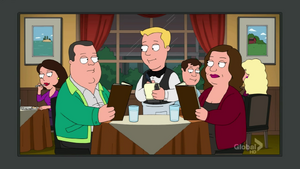 Mike & Molly is an American sitcom created by Mark Roberts, which aired on CBS for six season from 2010-2016. The series starred Billy Gardell and Melissa McCarthy as the title characters.

After restoring television in "Ratings Guy", Peter and the guys watch an episode of Mike & Molly at The Drunken Clam as Mike orders everything on the menu but the salad. Billy Gardell reprises the voice of Mike.

Retrieved from "https://familyguy.fandom.com/wiki/Mike_%26_Molly?oldid=184287"
Community content is available under CC-BY-SA unless otherwise noted.