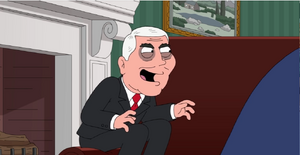 Michael Richard Pence (born June 7, 1959) is an American politician and lawyer serving as the 48th vice president of the United States. He previously was the 50th governor of Indiana from 2013 to 2017.

As Donald Trump tries to force himself on Meg Jabba the Hutt-style in "Trump Guy", Pence sits at his elbow and cackles in a parody of Salacious Crumb.

Retrieved from "https://familyguy.fandom.com/wiki/Mike_Pence?oldid=209700"
Community content is available under CC-BY-SA unless otherwise noted.