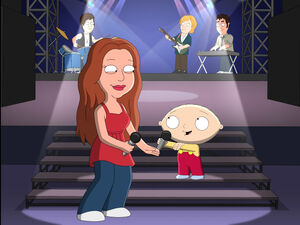 In "Hannah Banana", she first appears on Hannah Montana with her father Billy Ray Cyrus. At the end of the show, it was announced her tour as herself and Hannah Montana would be coming to Quahog soon. Stewie Griffin admits that she is his idol and he would do anything to meet her. After sneaking backstage, Miley and Stewie become friends, and sing Stewie's song "Friendship is the Best Thing Ever".

He and Brian later find out that she is actually an android, programmed by Disney to be a perfect actor/singer on and off stage. Later Brian asks Stewie if he could program her to have sex with him, Stewie, hesitant at first agrees to do so, but he accidentally re-programs her to be a chaotic killing machine. At the end after being tossed off a building, she is destroyed. She is voiced by Candace Marie Celmer.

A skit parodying her was originally planned for Family Guy Presents: Seth & Alex's Almost Live Comedy Show, but was cut.[1]

In "Fresh Heir", Chris compares the film Meatballs to the Miley Cyrus foam finger incident at the Video Music Awards in 2013.[2]

A clip from "Come On Home" in "Candy Quahog Marshmallow!" features a naked Peter riding on a cloud-shaped wrecking ball, a reference to the music video of "Wrecking Ball" by Miley Cyrus.

To stop a bomb from exploding on a "booze cruise" in "Veteran Guy", Peter encourages the spring-breakers to twerk like Miley Cyrus trying to prove something to her dad.

Retrieved from "https://familyguy.fandom.com/wiki/Miley_Cyrus?oldid=203507"
Community content is available under CC-BY-SA unless otherwise noted.