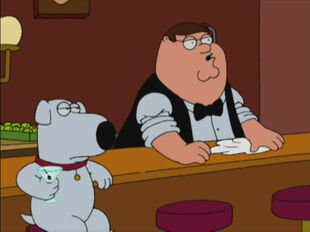 Peter running his bar in the basement

Mind Over Murder
Peter gets cabin fever and Lois gets disco fever.

Plot: Stewie is in terrible pain from teething and cannot find comfort anywhere. When Lois tells him that his pain will ultimately pass, it gives him the idea to build a machine that will move time forward to the point where his teething will have already stopped. 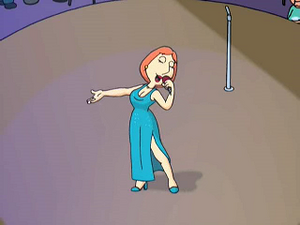 Meanwhile, Peter drives Chris to his soccer game, where he gets into a fight with another parent who insulted Chris for his playing ability. He punches the parent, who Peter then realizes is not a man, as he had assumed, but rather a masculine-looking pregnant woman.

Peter is put under house arrest for assault and soon finds that he misses his friends. He decides to build a bar in his basement so that his friends can come to visit and hang out with him. It isn’t long before the basement bar becomes a local hot spot. When Lois discovers this, she’s upset, but then she gets a chance to sing on stage before an adoring crowd. As she enjoys the spotlight, Peter becomes increasingly uncomfortable with all the attention she's getting, especially from the male patrons. In addition, after the wives of the male patrons express their anger to Peter, he suggests they come down and confront Lois. But the wives later have a change of heart after she tells them about her feelings, as well as how poorly Peter treats her, something Peter didn't bother to tell the women before. 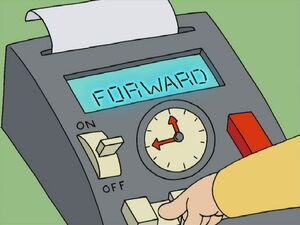 Meanwhile, Stewie's time machine plans are discovered, causing him to panic about the breach of security. In a clear move to protect the plans, he uses the machine to go back in time before his plans were actually found. But he reverses time just as Peter is having an epiphany about how poorly he treats Lois and seconds before the basement bar goes up in flames. Stewie even manages to back time up to before Chris's soccer game, successfully avoiding the whole altercation between Peter and the pregnant soccer mom. But, unfortunately, his teething pain is still with him.