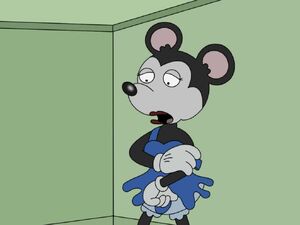 Minerva "Minnie" Mouse is an animated character created by Ub Iwerks and Walt Disney in 1928. The comic strip story "The Gleam" (published January 19-May 2, 1942) by Merrill De Maris and Floyd Gottfredson first gave her full name as Minerva Mouse. Minerva has since been a recurring alias for her.

Disney draws her nude in "A Picture's Worth a Thousand Bucks". Modeling for him, she feels embarrassed exposing herself this way. She is used as an example by Peter Griffin to his son Chris of people doing undesirable things to be a success.

To cheer Quagmire up when his Cat Cafe is shut down in "Cat Fight", Peter gives him a jumbo size t-shirt with Minnie Mouse on it.

Retrieved from "https://familyguy.fandom.com/wiki/Minnie_Mouse?oldid=222268"
Community content is available under CC-BY-SA unless otherwise noted.