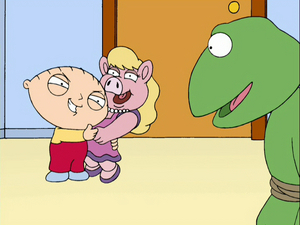 Miss Lorelei Piggy is a Muppet character who was primarily played by Frank Oz on The Muppet Show. In 2001, Eric Jacobson began performing the role, although Oz did not officially retire until 2002.

After being battered at the hands of Miss Piggy, Kermit tells Fozzie Bear that they are changing the name of a skit from "Bears in Space" to "Pigs in Space" in "And I'm Joyce Kinney".

Miss Piggy and Kermit have an offspring, Kermie Jr., that doesn't fare well in "In Harmony's Way".

Retrieved from "https://familyguy.fandom.com/wiki/Miss_Piggy?oldid=214632"
Community content is available under CC-BY-SA unless otherwise noted.