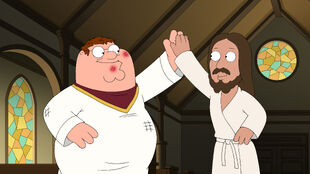 Mister Act
After getting an exercise bike from Peter for Valentine's Day, Stewie becomes attracted to Lois' new buff figure. 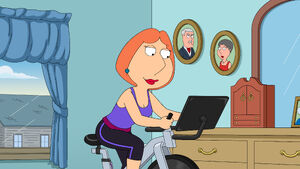 For Valentine's Day, Peter gets Lois an exercise bike and she soon becomes buff, to Stewie's attraction, which only gets stronger during a 'mommy and me' class together. When she tries to put him down to sleep that night, he starts crying which earns him extra time in bed with her. But when he plans a fully romantic night, he finds that she's quit exercising after only three days and her body has returned to normal, which turns him off. 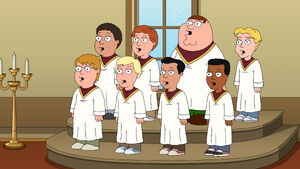 Meanwhile, Peter gives Lois' bike a try, and hurts his testicles in the process, raising his voice several octaves. When taking communion from the priest at church, he is invited to fill in with the altar boys where his efforts to spice things during choir work on the congregation, but earn him the enmity of the other boys. When the priest is unable to help, his plea for help earns him a visit from Jesus. However, his attempt to help earns him a beating from the altar boys as well. Employing a Karate Kid-style workout, he manages to take down the boys including the final one with a Karate Kid crane kick, which dislodges the wall crucifix and it lands on Peter's testicles, restoring his voice as Peter and the boys agree to never speak of the incident.

The episode ends with a tribute to various pieces of exercise equipment gathering dust, as Lois advises viewers to think about whether it's better to watch Ozark than to buy one of the pieces of equipment before tripping over a discarded weight.