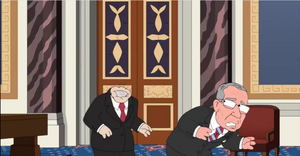 In "An App a Day", Brian takes a swipe at McConnell and his attempts to roll back Obamacare subsidiaries, irritating Stewie.

Mitch, who is frequently referred to as 'turtle'[1], pulls his head inside of his suit as Peter Griffin and Donald Trump take their fight though a session of congress in "Trump Guy".

Retrieved from "https://familyguy.fandom.com/wiki/Mitch_McConnell?oldid=209870"
Community content is available under CC-BY-SA unless otherwise noted.