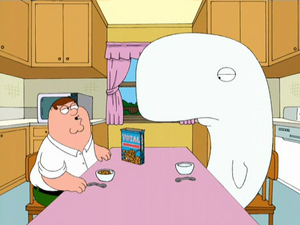 Moby Dick is a famous fictional white whale, from the 1851 novel of the same name by Herman Melville.

He paid a visit to the Griffins in "You May Now Kiss the...Uh...Guy Who Receives" which didn't go so well when, at breakfast, he begged Peter Griffin for Raisin Bran. All Peter could offer him was Total with some raisins mixed into it.

His personality in the cutaway is a play on his name, as he is, in fact, a dick.

He is voiced by Danny Smith.

Retrieved from "https://familyguy.fandom.com/wiki/Moby_Dick?oldid=167886"
Community content is available under CC-BY-SA unless otherwise noted.