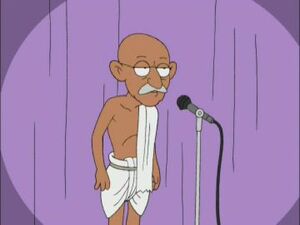 Mohandas Karamchand Gandhi (2 October 1869 – 30 January 1948), was the pre-eminent political and spiritual leader of India during the Indian independence movement.

Jack & Sarah's child of Indian descent in "Love Thy Trophy" is called "Gandhi" by Stewie Griffin just for being Indian.

In the first Stewie Griffin: The Untold Story segment "Stewie B. Goode", Gandhi is seen in a comedy club telling off-color jokes.

Peter makes up a quote that he attributes to Gandhi in "#JOLO".

Retrieved from "https://familyguy.fandom.com/wiki/Mohandas_Karamchand_Gandhi?oldid=176935"
Community content is available under CC-BY-SA unless otherwise noted.