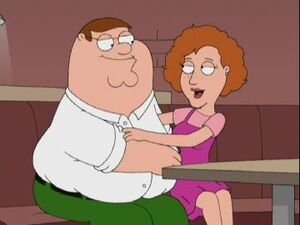 Molly Kathleen Ringwald (born February 18, 1968) is an American actress, singer and dancer. She became popular with teenage audiences in the 1980s, as a result of her starring roles in the John Hughes movies Sixteen Candles, The Breakfast Club, and Pretty in Pink.

In "Meet the Quagmires", Peter Griffin meets Ringwald in the year 1984A at St. Elmo's Clam. While there, they make out. Over the next 23 years, they fall in love and marry, much to Griffin's shock and dismay. She and her husband have no kids together, and are frequent dinner guests of Lois and Glenn Quagmire. She urged her husband to allow Judd Nelson to live with them. The marriage was annulled when the timeline was fixed.

Retrieved from "https://familyguy.fandom.com/wiki/Molly_Ringwald?oldid=194347"
Community content is available under CC-BY-SA unless otherwise noted.