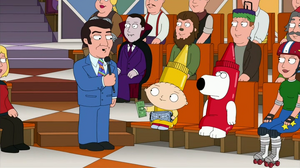 Stewie appears on Let's Make a Deal in a cutaway after bragging about being able to make a deal in "This Little Piggy". Monty asks for rouge and paper clips, which Stewie just happens to have in his purse to Brian's amazement that he has those items, in particular the purse.