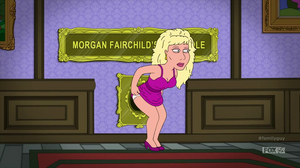 When Peter abuses his plane priveleges in "Dammit Janet!", one of his requests is to see a Morgan Fairchild movie.

In a cutaway in "Once Bitten", Morgan is shown to have a "fart hole" in her house, which sends farts from Hollywood stars to Tom Sizemore's house.

Retrieved from "https://familyguy.fandom.com/wiki/Morgan_Fairchild?oldid=177254"
Community content is available under CC-BY-SA unless otherwise noted.