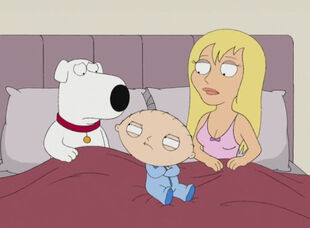 Movin' Out (Brian's Song)
Brian moves in with Jillian. 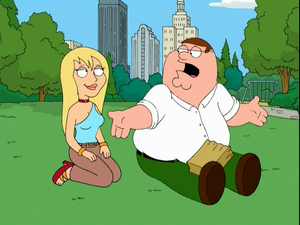 Brian turns down a chance to see Disney on Ice with Jillian, so he decides to give his ticket to Peter. After Peter and Jillian spend the entire day together and greatly enjoy each other's company, Peter convinces Jillian to either force Brian to let her move in with him or leave him. Brian agrees to get an apartment with Jillian. Much to his surprise, Brian has a good time living with Jillian, but he comes to the realization that there is no way he can pay the rent by himself and he decides to allow Stewie to move in with them, who now makes money with his own paper route. Brian does not tell Jillian that Stewie is helping with the rent, rather he tells her Stewie misses him. Stewie quickly gets in the way of Brian and Jillian's happiness living together and after arguing with Brian one night, Stewie reveals that he is paying half the rent, prompting Brian to admit he never wanted to move in with Jillian at all.

Heartbroken, Jillian leaves Brian. After many failed attempts to lift a saddened Brian's spirits, Stewie convinces Brian to try to get Jillian back. Brian goes to her apartment, only to find that she has now moved in with Mayor Adam West. As the two go their separate ways, Brian moves back in with the Griffins, where he manages to move on with his life. Peter then says that "You should have never have asked her to live together". Ironically Peter was the one who ruined Brian's relationship. 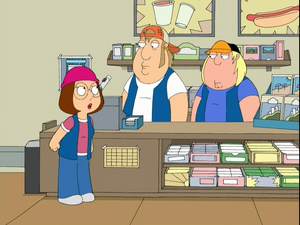 Meanwhile, Meg is given a job at a local convenience store. Meg is extremely happy with her job and she decides to help a recently unemployed Chris get a job there. Chris immediately clicks with the store owner, Carl, and he is given a large promotion which Carl originally promised to Meg. When Meg takes issue with this, she is fired. Lois, to whom Meg has told of her plight, explains the situation to Chris and tells him to stand up for Meg by getting her job back. Chris is able to do this after bribing Carl by withholding his opinions of movies he and Carl normally discuss until Carl re-hires her. Meg, in turn, rejects working at the store again, as she did not want to work with Carl again.

Retrieved from "https://familyguy.fandom.com/wiki/Movin%27_Out_(Brian%27s_Song)?oldid=218401"
Community content is available under CC-BY-SA unless otherwise noted.