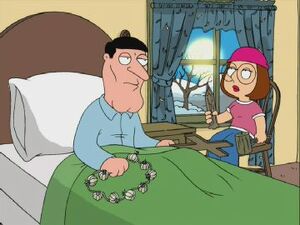 Ron Berler is one of Meg's teachers at James Woods Regional High School.

In "Let's Go to the Hop", he tells Meg to stay away from the cool kids.

In "And the Wiener is...", he is shown to be afraid of vampires.

He disagrees with Neil Goldman's selection as the better Star Trek captain in "The Kiss Seen Around the World", supporting Captain Picard as the superior officer.

He also makes a short appearance ignoring Peter when he is locked in the car in "Petarded".

He makes another appearance in "Brian Sings and Swings", showing Meg's class a video of him and his wife preparing to have sex, he also called Meg awful in the same episode.

He is also seen in the courtroom in "The Simpsons Guy".

Retrieved from "https://familyguy.fandom.com/wiki/Mr._Berler?oldid=222587"
Community content is available under CC-BY-SA unless otherwise noted.