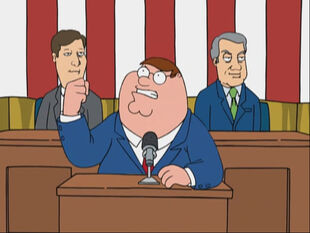 Mr. Griffin Goes to Washington
When the Happy-Go-Lucky Toy Company is bought by a tobacco company, Peter is made president. 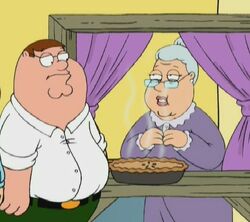 Peter is almost fired from the toy factory for skipping work to go to a baseball game, but then the El Dorado Cigarette Company takes over the toy factory and Peter is retained.

El Dorado immediately starts making toys to promote underage smoking. Lois is concerned and prods Peter to confront the management about it, but when he does, the El Dorado board makes Peter president of the toy company to distract him. Included with the new jobs are perks such as hiring an ugly girl to stand next to Meg so she'll look better by comparison, Peter's own company suck-up and Martha Stewart to help Lois around the house that make Lois forget her opposition. Brian however is not swayed, and pledges to quit smoking. 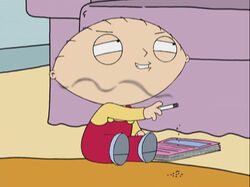 When El Dorado holds a meeting, they reason that the only way to communicate with the idiots in Congress is to send someone just as dumb, and they decide to send Peter. When Lois sees Stewie smoking, and she and the kids follow Peter to Washington, D.C.. Peter is easily able to communicate with the congressmen. Peter prepares to deliver his speech on the floors of congress assembled, but hears Stewie in the back coughing. He tells Congress to reject El Dorado's proposal, and Congress imposes a fine of infinity billion dollars, but lowered it to a more realistic fine of one hundred million dollars on the company for promoting underage smoking, bankrupting the company in the process.

The ending of the episode features a reminder from the cast about the risks of killing strippers.