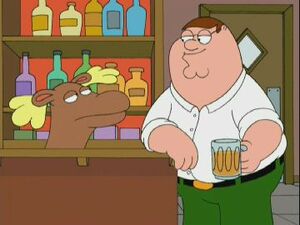 Mr. Moose was a puppet character, in the form of a moose, on the children's television show Captain Kangaroo. He is best known for riddles and knock-knock jokes that resulted in hundreds of table tennis balls cascading from above and hitting the Captain in the head and he laughed at him.

In "Hell Comes to Quahog", when Joe Swanson sends the last ping-pong ball out the window, Peter Griffin says he will get some more from Moose. While doing so, he sets up a knock-knock joke from him, at the time very weary.

Retrieved from "https://familyguy.fandom.com/wiki/Mr._Moose?oldid=188568"
Community content is available under CC-BY-SA unless otherwise noted.