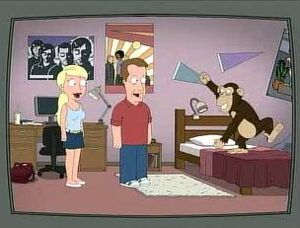 Mr. Nubbins is the name of the chimp sidekick to Byron, played by James Woods, on Class Holes!. He was brought in at Woods's urging, as a chimp character was not present in What I Learned on Jefferson Street, from which Class Holes! is loosely based. Creator and producer Brian Griffin was not pleased when the character was created in "Brian Griffin's House of Payne". Nubbins would've also played the reincarnated form of the main human character in a buddy-cop themed program that Woods also suggested.

Retrieved from "https://familyguy.fandom.com/wiki/Mr._Nubbins?oldid=85059"
Community content is available under CC-BY-SA unless otherwise noted.