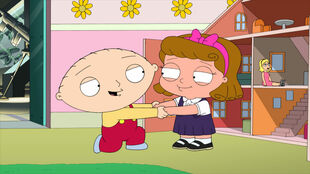 Mr. and Mrs. Stewie
Stewie meets a girl who's his match in weaponry. 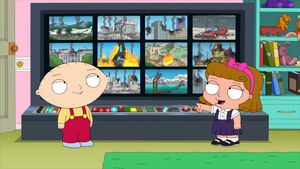 At a book reading with Brian, Stewie is forced to come along when Brian gets a score with a college girl. To make up for keeping Stewie out all night, Brian takes Stewie to the park where he meets Penelope, a girl takes revenge on a boy who pushes Stewie. Playing together, Stewie discovers they share a love of advanced weaponry. When he discovers that she actually managed to kill her mother, he becomes totally enraptured. They continue to spend time together, wrecking havoc through town and the world.

Brian confronts Stewie when the news gets out, trying to convince him that Penelope is bad news. As she plots to kill another teacher, Stewie confronts her, admitting that Brian suggested they take it easy. Angered, Penelope extracts a vow from Stewie to kill Brian. Although hesitant at first due to their friendship, when Brian starts to write Stewie Starts but hesitates again after several misfires. Admitting to Penelope that he couldn't do it, Penelope decides to do the job herself, leaving Stewie to stop her. After thwarting several attempts, Stewie tells Brian about the threat. Penelope arrives and Stewie does battle with her, As they fight, Stewie gets the upper hand and she agrees to leave Brian alone. Penelope kisses Stewie goodbye before riding off with a smile. 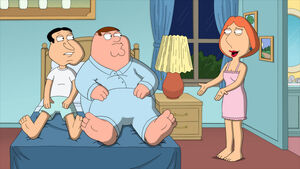 Meanwhile, when Lois gets tired of being crushed by Peter in bed, she gets twin beds. Unable to sleep alone, Peter proposes that he and Quagmire sleep together. Taking up Peter on the offer, they sleep as their friendship blooms and Peter starts staying at Quagmire's house. Lois asks Peter to return, admitting that she missed Peter too and Peter leaves with a crushed Quagmire plastered to his back.

Retrieved from "https://familyguy.fandom.com/wiki/Mr._and_Mrs._Stewie?oldid=198591"
Community content is available under CC-BY-SA unless otherwise noted.