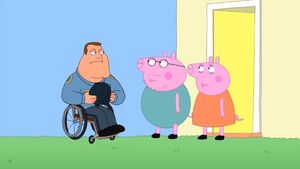 Mummy and Daddy Pig are the parents of the title character and supporting cast in Peppa Pig.

In "Connie's Celica", Joe has to deliver the news to them that Connie D'Amico used Peppa in her faked death by placing a blond wig on her and crashing her car after cutting the brake lines.

Retrieved from "https://familyguy.fandom.com/wiki/Mummy_%26_Daddy_Pig?oldid=218399"
Community content is available under CC-BY-SA unless otherwise noted.