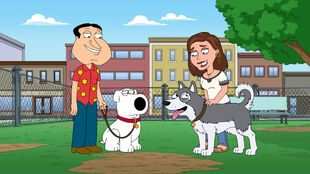 Must Love Dogs
Quagmire pretends to love dogs to impress a woman. 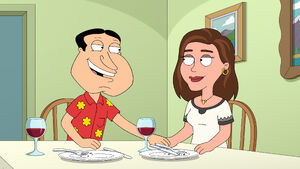 During trick-or-treat night, Quagmire meets a woman escorting her niece around and hits it off, but during a breakfast date, he discovers that she's a dog lover and he finds himself trying to pose as one as well. After briefly considering buying one, he approaches Brian about posing as his dog, and, after Brian enjoys a good laugh at his expense, agrees to it in exchange for six tennis balls. As Quagmire worries about Brian acting like a real dog, the latter admits he's really just waiting to see Quagmire crash and burn. He decides to help things along when Quagmire insists that she's the one by presenting an engagement ring to her, and she accepts. After the initial shock, Quagmire seems to accept the news well until she moves in with all of her rescue dogs, causing the fur to fly. During their engagement dinner party, Quagmire accidentally uses the word 'walk' and causes a stampede. With the party ruined, Quagmire finally reaches his wits end and admits he really hates dogs, breaking up the relationship over his lie. He vows revenge on Brian and goes for a walk, leaving him alone in the house. 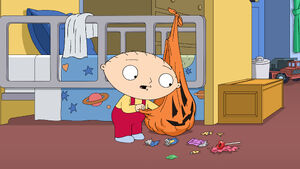 Meanwhile, after a good haul on trick-or-treat night, Stewie finds his candy significantly depleted and suspects a thief. He sets a trap and catches Chris when he walks into his room, but he denies being the thief and lets him know that it's really Peter, having done the same thing to him when he was a child. He offers to help by showing him a hiding place that Peter would never find, but when he returns for it, the entire bag has been emptied as it's revealed that Chris was working with Peter all along.

Seamus shows up at Brian's door with a bloated screenplay for him to read as Brian realizes this is the revenge that Quagmire threatened. Mayor West gets in a final word encouraging men to get a colonoscopy.