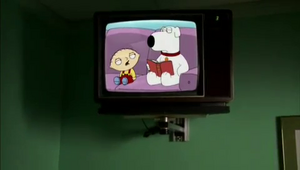 My Name Is Earl is an American television comedy series that aired on the NBC television network from September 20, 2005, to May 14, 2009.

Earl J. Hickey is a petty criminal, whose winning $100,000 lottery ticket is lost when he is hit by a car. Lying in a hospital bed, he develops a belief in the concept of karmic retribution when he hears about karma during an episode of Last Call with Carson Daly.

Stewie appears in the Season 1 DVD exclusive short of My Name Is Earl titled "Bad Karma", In which Earl's trip to the hospital causes him to watch Family Guy on TV instead of Carson Daly. Instead, the clip influences Earl to get even with everyone who's wronged him.[1]

Trying to remember who he is, in "Forget-Me-Not", Peter says, "I think my name is Earl", which cues the theme song for the series.

Retrieved from "https://familyguy.fandom.com/wiki/My_Name_Is_Earl?oldid=182488"
Community content is available under CC-BY-SA unless otherwise noted.