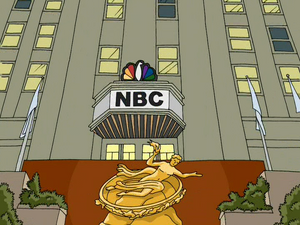 The National Broadcasting Company (NBC) is an American television network headquartered in 30 Rockefeller Plaza in New York City's Rockefeller Center. It is sometimes referred to as the Peacock Network due to its stylized peacock logo.

In "If I'm Dyin', I'm Lyin'", they cancel and revive Gumbel 2 Gumbel Beach Justice on behalf of Chris and Peter Griffin. Network executives are also seen pitching "new" program ideas. However, when one executive suggests they try to come up with some original shows rather than the same themes they've used before he's beaten senseless with a framed poster of Just Shoot Me. They also created a new day, Katilsday, just so they have another opportunity to air Dateline.

The NBC Studios appear in "Don't Make Me Over" when Meg and the Griffins appear on Saturday Night Live.

In "I Take Thee Quagmire", Death met with NBC executives about the status of Joey before being assigned to Glenn Quagmire, not knowing his funeral was staged.

Brian and Stewie refer to NBC shows Scrubs and Seinfeld in the Emmy performance "You Can Find It on TV".

Many past and present NBC shows have been aired on the Griffin television and/or been parodied.

Retrieved from "https://familyguy.fandom.com/wiki/NBC?oldid=220996"
Community content is available under CC-BY-SA unless otherwise noted.