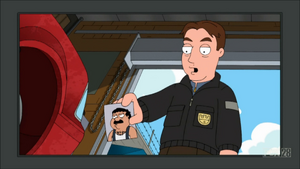 Tom Tucker appears on NCIS in "Tom Tucker: The Man and His Dream" after landing a bit part with Peter as his agent.

While the Griffins are trapped in a motel room during a hurricane in "Holly Bibble", they attempt to watch NCIS on CBS, which is billed as the loudest network on television. They struggle to maintain their positions as the volume comes close to blowing them away.

Retrieved from "https://familyguy.fandom.com/wiki/NCIS?oldid=222370"
Community content is available under CC-BY-SA unless otherwise noted.