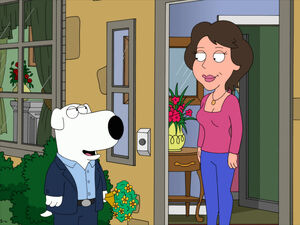 She provides the voice of Rita in "Brian's Got a Brand New Bag" and "Valentine's Day in Quahog", an unnamed woman who cries in the restaurant after talking about her drowned child in "Jerome Is the New Black", Nancy Pelosi in "Excellence in Broadcasting", Justin's mother in "Halloween on Spooner Street" and other miscellaneous characters.

Retrieved from "https://familyguy.fandom.com/wiki/Nana_Visitor?oldid=197060"
Community content is available under CC-BY-SA unless otherwise noted.