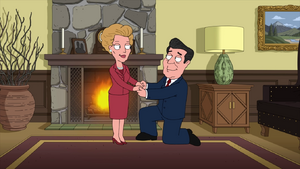 Brian compares his feeling with Ellie to the relationship between Ron and Nancy Reagan in "Boy (Dog) Meets Girl (Dog)". In a cutaway, Ron extracts a promise from her to ignore the AIDs crisis while focusing ineffectively on drugs.

Nancy is voiced by Rachael MacFarlane.

Retrieved from "https://familyguy.fandom.com/wiki/Nancy_Reagan?oldid=201771"
Community content is available under CC-BY-SA unless otherwise noted.