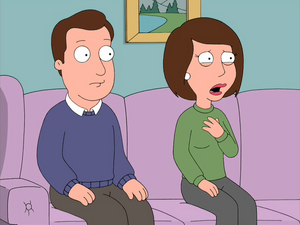 Naomi Robinson was a former friend of Lois Griffin's at Salve Regina College who she tells her husband Peter she had experimented sexually with. She appears in "Partial Terms of Endearment".

When she meets Lois at their 20 year reunion, she tells Lois she has a proposal, Peter assumes she is talking about three-way sexual intercourse. When she shows up with her husband Dale whom she met in corporate finance. When they clear the air, they tell Lois and Peter they've had trouble conceiving and ask Lois to be a surrogate mother for them. Despite Peter's objections, Lois goes through with the procedure to implant one of Naomi's fertilized eggs in her uterus but is thrown for a loop when they are killed in a traffic accident shortly thereafter, on the same day that Dale wins the lottery. Lois and Peter are in a quandary as to what to do with the embryo and decide to take Brian's suggestion to consider abortion. While they initially decided on going through with the abortion, a video convinces Peter to back out. After a night of discussion, Lois goes ahead with the abortion.

Despite his death, Dale is seen in church coughing near Lois admitting he was actually sick, then sitting next to Joyce in the end of "And I'm Joyce Kinney". He also appears in the end of "Tea Peter".

Naomi is voiced by Julia Sweeney.

Retrieved from "https://familyguy.fandom.com/wiki/Naomi_%26_Dale_Robinson?oldid=223448"
Community content is available under CC-BY-SA unless otherwise noted.